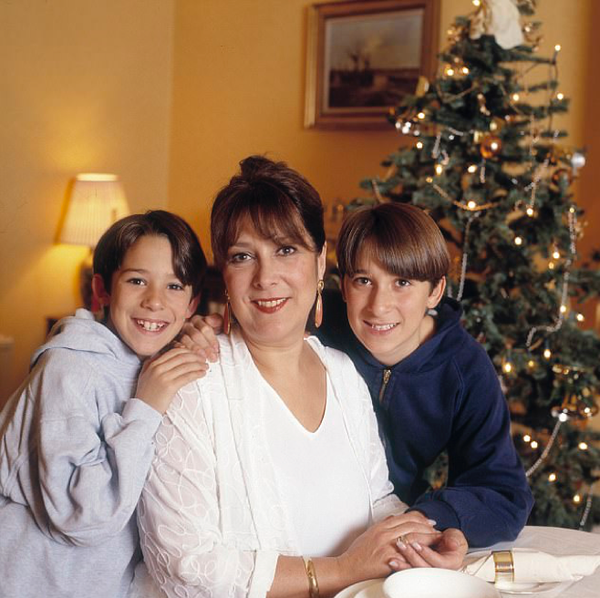 But three years after her death on 19th October 2014 the actress’s family has been torn apart by a bitter rift, with her sons accusing her third husband of giving them only a derisory sum from her estimated £5 million estate.

Michael and Robbie Peluso, Miss Bellingham’s sons from her second marriage, say they will get just £50,000 each from their mother’s millions after reaching a settlement with stepfather Michael Pattemore, 61.

Mr Pattemore said last week he had given Michael, 34, and Robbie, 29, a £750,000 flat, claiming: ‘They said they always wanted a roof over their heads. I’ve given them that, but now they want it sold.’

He added that the brothers also receive monthly income from the property’s rental.

But Michael says this is a distortion. ‘The flat has a £576,000 mortgage on it. Under the terms of the agreement, we have to sell it within two years. We aren’t allowed to live in it.

‘But this was never about the money – it’s about the fact that our mum trusted him to look after us, and that hasn’t happened. At least we’re finally nearer to the point where we can have nothing more to do with him.’

For Michael, an actor, and Robbie, a manager at a New York hotel, it is an unsatisfactory ending to a feud triggered by their distress at Mr Pattemore’s behaviour following their mother’s death. Within months, he had a hair transplant, took a round-the-world trip and bought a new Chevrolet Corvette

In a television interview, Mr Pattemore wept as he described his “18 months of hell” over the will and said he had been spat on by strangers.

He even claimed Miss Bellingham had left £50,000 in debts.

Michael said: ‘It’s a kick in the teeth hearing about his hell when he’s sitting on around £5 million of property, much of which was bought with our mum’s money. None of Mum’s friends or family will speak to him now.’

Sadly, the ugly situation was provoked by Miss Bellingham’s will which – inconceivably to friends and family – left everything to Mr Pattemore, whom she married in 2008. Michael says: ‘She signed a new will when she was on strong medication, two weeks after an operation to remove a tumour.

‘We’d talked about her wishes, and she said there would be trusts for Robbie and me.’

Instead, the will said that when Mr Pattemore died, the first £1 million of the couple’s property portfolio should be divided between her sons. ‘Of course, there was nothing to stop him spending all that money,’ says Michael.

When Mr Pattemore shared the details of Miss Bellingham’s will with her sons, they say they were shocked, but hoped he would help them with a deposit for a flat, which their mother always said she wanted to give them.

Almost a year later, after receiving just £750 each, they sought advice. Their recent settlement means Mr Pattemore no longer has to honour the £1 million promise.

The brothers believe their mother was under Mr Pattemore’s control.

‘She was scared of him,’ says Michael. ‘Unfortunately, she was very trusting and her self-esteem was low.

‘If she wanted to give me some cash to spend on my son, Sacha, she’d slip it to me secretly, when he wasn’t there. Just before she died, we got the feeling she wanted to tell us something – but he was always hovering nearby.’

Miss Bellingham died leaving no cash assets. Everything she had was tied up in investments and property. Michael adds: ‘During the decade she was with him, she was making very good money, doing Loose Women, touring in Calendar Girls, publishing four books and appearing in panto.

‘But she’d tell me she was worried about never having money, because it was all invested as soon as she made it.

‘Everything she made went through Pattemore’s company.’

Mr Pattemore, who has begun a new relationship with a woman named Pam, has branded the brothers ‘stupid’ for contesting the will.

And he refuted their suggestion that they had been badly done by or that he had any influence over Miss Bellingham and her will. ‘It was not me, but Michael and Robbie who started the legal process,’ he said.

‘When Lynda and I came together, we both came with 50-50 – in fact, I came with more. We shared everything. Lynda and I were so in love and it is wrong and hurtful to suggest she was afraid of me, or that I controlled her in any way.

‘It is true the family has taken sides with Michael and Robbie. But I am still very much in contact with the real friends we had.’

Another very sad story of children unknowingly being being excluded from their parents will due to a second third or even fourth marriage. With a properly drafted up to date will and estate plan this will minimize the need to ever have your children contest their parents will to inherit what is legally theirs – make sure your will is regularly reviewed – all our clients have theirs reviewed annually.