IHT if often referred to as the Double Whammy! It is the continued application of Inheritance Tax on assets which are bequeathed to a Beneficiary and thus increasing their own personal wealth (estate). This may mean that IHT has to be paid again on the inherited assets on death and this will continue through future generations.

Who is affected? Everyone whose Will does not include Trusts and whose assets are passed to Beneficiaries.

Some examples of the effects of Generational IHT

‘Mr’ dies leaving an estate of £1 million including his main residence with a value of £350,000. No gifts have been made in his lifetime. He leaves behind 1 daughter. 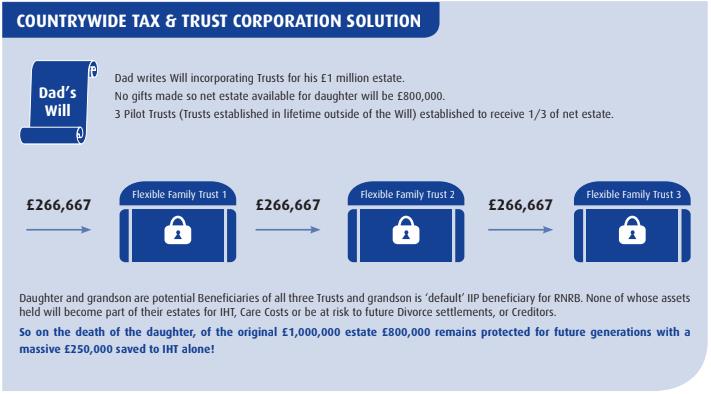 A further example of the effects of Generational IHT.

Mr Brown’s Will left everything to Ms Green and then to his children.

Ms Green inherits a net estate of £430,000. Through her will she can leave assets to whomever she wishes, potentially disinheriting Mr Brown’s bloodline children.

Ms Green claims the RNRB as she is leaving to lineal descendants.

The children inherit £638,000 which adds to their estate.

Where a couple is married and they have assets above two RNRBs and two NRBs there will be IHT payable for the Beneficiaries on 2nd death without the correct planning. Assets should not be left to the Beneficiaries. Trusts should be established for both husband and wife and the estate equalised.

Prior to second death further planning can take place to reduce any IHT liability and the assets will not impact on the Beneficiaries own estates and give rise to further IHT.

Trusts can also protect the assets for the Beneficiaries from Care, Divorce and Creditors.

Even where assets held below the available Bill Rate Band and no Inheritance Tax is due, assets should ever be distributed to a Beneficiary as this then adds to their own estates which may mean an IHT bill for their chosen Beneficiaries and leaves those assets accessible to their own Care Costs, attack-able by Divorce Settlements and Creditors.

Due to changes announced in the July 2015 Budget, Multiple Trusts settled on the same day (for instance settled by a Will) will be subject to periodic and exit charges, even if the Trusts are set up on different days. Our advice remains, continue to use Multiple Trusts as there are various options open to Trustees following the death of a Settlor to reduce the occurrence of periodic and exit charges.

This post contains only general planning and is not to be construed as advice for any personal planning. Each strategy recommend is based on individual circumstances.